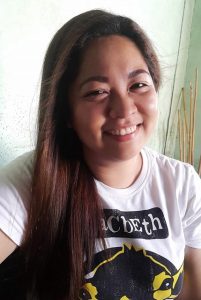 Hi my name is Camelle, which by the way, has been mispronounced so many times, so I’d rather be called “Mille” just so everyone won’t be addressing me as a large creature that lives in the desert. Haha!

I am a mum of three kids – two boys and a girl. My parenting life started pretty early as I had my first child when I was seventeen. My partner, who was my high school sweetheart, died in a motorcycle accident two weeks after our second child was born. It was really hard because I was just nineteen. I had no spare time to waste as I needed to collect myself because I had two mouths to feed.

I had to leave my children with my parents to look for work. I only got to visit them twice a month because traveling 64km daily is simply impossible. My first job was with a well known shopping mall, but I only stayed with them for six months as per the contract. After a month of looking for other work and spending time with my kids, I got another job and was employed by a well-known beauty brand. I was accepted as part of the seasonal staff and stayed until the holidays. Fortunately, they decided to continue my employment. I started again, as a regular employee now, as a skincare specialist. I got promoted to head cashier, and eventually handled the position as Store Supervisor. I managed top stores, reached monthly targets and trained potential leaders. I stayed with them for eight years – almost half of my life was spent there and they were like another family for me. It was really hard to say goodbye to those people but we had to part ways due to the company’s financial status.

I then decided to try the BPO industry. I had lots of doubts if I could make it, but as the saying goes, there’s no harm in trying, right? The first time I tried, I was immediately accepted and oh my, it felt so good! It’s as if I won the lottery! It was an achievement because speaking English before was very intimidating for me. I started off as an inbound agent for a US Satellite radio company. We took in calls from customers who were interested in the service. We had to explain the benefits, package inclusions, promotions, etc. After a year, I was transferred to retention and this time, I had to do everything I could just to stop customers from withdrawing the service. I stayed with the company for eighteen months. Sadly, I had to say goodbye because we had to move to another city. My current partner decided to start a business and we needed to have more space.

My most recent job was with an NZ Telco. I handled everything that’s related to mobile services – billing queries, credit adjustment, outages, technical concerns, handset malfunctions etc. We address concerns through calls, chat and email. I filed my resignation after two years. The good thing about technology is that I can still keep up with my family and friends despite the distance and schedules.

I have decided it’s about time to spend more of it with family. It’s been ten years of being away from them, and that’s why a home-based job is the next best thing. I can only imagine earning money while watching my kids!

I have been a front-liner since day one. And yes, customer service is not easy, but for me this is an avenue where I get to learn from each individual. It’s what makes us unique from one another. As for the post, I am the one that’s bridging that gap to provide them the assistance and satisfaction. It’s just an overwhelming feeling going through that extra mile to provide the best service to people who are in need.

I believe I have enough background and skills to take on a new role as a Virtual Assistant. My ten years on the field has built a strong foundation for my career. I have the RELIABILITY, I have the determined ATTITUDE, I also have the TALENT and EXPERIENCE.

For a copy of Camelle’s resume please click here.