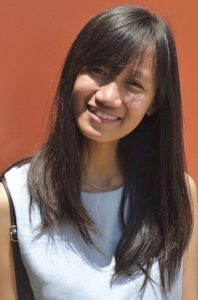 Hi, I’m Jan Jodel Asumbra and I’m from the Philippines. You can call me Jodel for short.

I honestly do not know how to tell you my story without making it sound boring. I still have doubts if my entry would be interesting enough to make the cut to be in your team, but here it goes!

I belong to a family of six. My mum manages some of our small businesses including our bakery, apartments, and a lottery outlet. My dad has been a seafarer since 1998. I have 2 sisters and 1 brother.

When I was in High School, I experienced being bullied by my classmates and worse, even by the people that I thought were my friends. But things changed when I got an opportunity to be part of C.A.T. (Citizen’s Army Training) during my senior year. Honestly, some part of me thought that joining the C.A.T would be a way to lessen the bullying as I would have power during the military training. Little did I know, it would also open doors for me to have genuine friends, good relationships with people, and learn new things.

When I entered college, my experience was a bit different. I made so many friends that have remained with me even now, though we have followed separate paths in life.

Academically speaking, I’m mediocre, but my college journey made me realise that life is more than being able to survive an exam, semester, etc. It is a journey of building good relationships with people, helping each other academically and personally. I learned that college is more than how a person looks to be able to fit in society.

Right after college, which was 2017, I applied as an Operations Assistant but I was later hired as a Finance Assistant. It was unfortunate for me at first to think I didn’t get the job that I wanted, only to realise that it was a stepping stone for me to be able to become more independent, goal-oriented, keen in details,

versatile, and most importantly, I learned that it’s great to be curious in a lot of things rather than already having the right answers, then you’ll have more means to make something better.

After almost a year, I requested a transfer in the Operations Department. I became an Account Executive where I handled one of the leading key accounts of the company. I was glad I became part of another team as it led me to be more exposed to learning more of the operational and commercial side of the company. Then, a year later – July 2019, I was promoted to be a Senior Account Executive which oversaw more of the financial side of the Key Account I was handling.

There have been a lot of ups and downs through-out my life journey with people, studies, work, etc. But, one thing’s for sure, I have learned to never give up. Never let people dictate who you are or who you will be, and never let any circumstances bring you down. I believe I am still in a continuous learning state and for that I am grateful because I think knowing in yourself you still have a lot to learn means there is so much opportunity for you to grow personally and professionally.

For a copy of Jan’s resume please click here.