Hello there! I know everyone has their own exciting and interesting story to tell, and mine… well… is not that exciting – it’s just (maybe?) plain and simple. 🙂

I am Karen and I am the eldest of three siblings. My mother and father worked in a private company together. Sadly, though, my father passed away in September of 2018. 🙁

Mama was always hands-on when it came to taking care of me and my siblings. She would always find time to bond with us despite her busy schedule – you know how mothers are! They are our superheroes alongside our dads. He also spent time with me whenever he was home from work. He was a good cook and and also looked after me whenever mama was busy. Of course all of this took place on Sundays – outside of work.

I have a sister who is now working and another one who is still making her way through college (she is in her 4th year by the way). 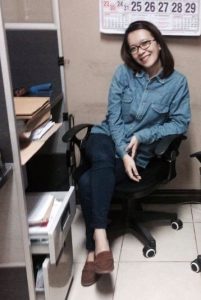 I was born and raised in the Philippines. I am also the first granddaughter of my grandparents so I often spent my days on an island called Camiguin with my grandparents. Then after months with them I would return to the busy and growing city of Golden Friendship called Cagayan de Oro City.

In my growing years, as I was the first granddaughter – that made me also the first niece to my uncles (brothers of my mum). Normally I would spend time with them and as a cute and adorable kid (not that I’m biased!) they were always over protective of me, as was my official babysitter. I remember only being allowed to play with my older cousin and one other playmate – and that was always inside the house. Consequently, I did not get much time playing outside with other kids. My ‘outside’ time was limited and as the other kids were all older than me, I could not comprehend and join in their games.

Despite this, childhood was not plain and boring because I had a pet dog named Duday. I always played with it and would walk Duday outside the house – but not for too long and of course, always in the company of my nanny. I was not at school yet so when I was not with my pet and not playing with my playmate and toys, I could be found at my aunt’s house just across from ours. I would observe her baking. That was always fun because I would see and hear the sound of a huge mixer that was bigger and taller than me, the scary oven where I could literally fit inside… and the most exciting part – I got to eat or taste-test all of the cakes and pastries my aunt made! Back then I did not realise how lucky I was that I could eat expensive pastries at any time of the day. Sansrival is still my favorite – but honestly all of the sweets and pastries my aunt baked were delicious, and I still enjoy partaking in them any chance I have.

The time came when I had to do things by myself. I had to dress myself, tie my shoelaces, eat my meal, pack my things, write, listen to my teacher, meet new friends and all that stuff that you experience as you explore your world and enjoy with a fellow classmate… it’s called school.

It was a time when I had another world besides my little family. Memories of that time include being alone while exploring my new playground. My parents would drop me off and return after work to pick me up. So at an early age I learned the word ‘responsibility’. Yes! You got it right. I had nobody to rely on at school so I had to be responsible for myself. I had to eat my snacks, follow simple rules, look after my things and even go to the toilet on my own. After our classes ended I had to wait for my parents to pick me up, and it would sometimes take time because they may have been delayed at work. There were times when my aunts would pick me up instead.

Years passed quickly. During my 8 years in school my responsibility also stepped up. Not only did I look after myself, I was in charge of looking after my younger sibling. I had to check on her during break time and in between classes just to see if she was okay.

Fast forward to my graduation in grade school – next level coming my way. I was enrolled at the very same school back when I was in Kindergarten. I had made friends from my section and also with the younger students. The teachers knew me as well because I had spent numerous years with them.

High school was fun. It was when we began building our bonds with our closest friends. At that time we were also building our dreams. Even after high school everyone still felt they belonged within a specific group of students / circle – and I am still with my circle up to this day. It was not that easy to maintain our friendship but it was all worth the effort. Everyone was excited to graduate and go to college. Thank God for the camaraderie and perseverance, with it we were able to graduate on time, and most of us made it with flying colours.

College life was not all fun and partying. I had to think of my future and what I planned to become after I graduated, so there was also pressure. I sometimes wondered if I made the right decision. If anything didn’t go according to plan I would take time to pause and talk to God, ask for his guidance and Blessing in everything I did and the following decisions to be made.

College life was where my circle of friends grew bigger and bigger and new experiences came my way. I met new people on every block, heard stories from people from different walks of life… and I gained wisdom and knowledge, got to know myself better and became part of the more challenging and bigger world outside the walls of the university.

Graduation came just as we expected. But I will admit, we did not expect it to happen so quickly… and suddenly we all had to part ways, enter into new endeavors, and take different paths.

“The real world” – the sound of it was scary and exciting for me at the same time. We were present at every known Job Fair in the City. We did not miss any because we were that excited to be hired and land a job. After interview upon interview, I finally received the good news! I was hired by a construction company here in the Philippines.

I took the job, learned the process, socialised with other employees, and tested the waters for a couple of months. It was not that easy as it was my first job and I was part of the HR team. HR is not an easy responsibility, but I managed and honed my skills for three years there. I applied what I learned at school to my work. I struggled a little during my on-the-job training, experiencing some difficult situations and learned to solve them by myself. On a positive note, learning was also fun and I enjoyed my time there. I learned from them and I hope I brought something to them. Not only did I gain knowledge that I can use in the future, I also developed friendships and earned respect.

I finally resigned because I wanted to explore another career. I also want to grow as a person – and for me, we grow by experiencing new things, exploring and taking risks. My advice is to never stop learning and taking chances.

So here I am looking for a new challenge. I may not have the experience as a virtual assistant but I am more than willing to learn and accept constructive criticism. Here are some of the skills I have: data entry, data research, encoding and transcribing. I would be happy to work with you in the future. Thank you for your time and have a great day ahead! 🙂

For a copy of Karen’s resume please click here.