Hello! I am Christina Ronquillo Mariano, 27 years old from the Philippines. My closest of friends call me Tehdi, while my office colleagues call me Tin, Tina or just Christina. It doesn’t really matter what you call me. 😀

I will tell a short story where the name “Tehdi” came from. Back in high school, (I could say this was the best part of my school days) I belonged to a circle of amazing, cool and the funniest of friends. I had a crush then on my current fiancé who looked a bit like Mr. Bean 😀 So my friends kept on teasing me about him, and comparing the unbeatable closeness of Mr. Bean to his Teddy, so they named me after it. LOL But to personalise the nick-name, I made some changes to the spelling and have used that pet name ever since.

High school was over. Now I had to decide which course to take in college. My mind was literally empty. I didn’t know what I wanted. I couldn’t even picture myself as someone with something in the future! 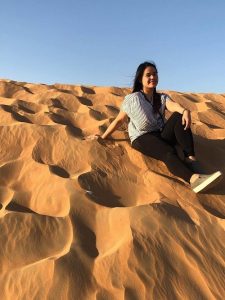 local government. At the time there were less students than at other colleges – 2 sections had less than 20 students per class. The college was located in a remote area, and I was very sad and didn’t feel motivated about studying there. You may wonder why I chose it in the first place? I didn’t; circumstances chose it for me. My parents didn’t have enough money to send me to even a public university. At this college, tuition was almost free. We spent around $10 to get in, whereas the other institutions required $120. I was miserable. I blamed everyone, including my parents. And that is something I will always regret. 🙁

After day one, I told my mother that I no longer wanted to go back in that college. I know it broke her heart. Somehow she managed to raise money a few days before the close of enrollment date to a public university. Only problem was, the Bachelor of Science in Accountancy course was not offered at this university. BS Accountancy was offered only at the private university, but the tuition fee was twice as much as the public one. Our money was limited, and time was running out. I decided to enroll in Bachelor of Science in Business Administration in the public university. I convinced myself it would be just like a pre-course to Accountancy. I wasn’t really keen on Accountancy at that time, but my mother was an Accountancy graduate who didn’t have the opportunity to take up the board exam… so I was pursuing her dreams.

My first semester in BS Business Administration ended. I figured I didn’t want to enroll in the 2nd semester. I decided I wanted to go straight into Accountancy. We still didn’t have enough money to transfer to a private university. I also realised that my classes were irregular and chaotic… so I made the decision to pause my studies and look at enrolling the following year to have regular classes.

During my temporary out-of-school time, I worked as part of the service crew in the No. 1 Fastfood Chain in the Philippines – Jollibee. I enjoyed working there so much – not to mention the free crew meals! 😀 I am very thankful that I got to be part of their team, even for the 5 months tenure.

Then, my Accountancy journey began…

It went pretty well, I easily caught up with the classes. I guess I made the right choice! Four years passed on that roller-coaster ride – but I survived college! Fast forward to 20th April 2013, I graduated with a degree in Accountancy. A few months after graduation, I started the review classes for the board exam.

21st October 2013 and the results for the licensure exam were released. I was scrolling on my phone as I reached the M listings, and began crying because I thought I had failed. But no, my name was among the list of passers! It was the happiest day of my life (so far). My parents were very proud of me. I made a promise to myself, this was the start of paying back to my parents for all their support.

I took a break from continuous study, and I secured my first corporate job on 20th January 2014 as Internal Auditor of a Rural Bank. It was more of an operational audit so after a year and a half, I looked for another job where I could use my profession functionally.

I landed a General Accountant role in Microtel Inns & Suites by Wyndham – a 50 room hotel in our locality. I could not ask for more; everything that I wanted was there. I did full-round accounting from journal entries, to closing of accounts, to FS preparation and annual financial audit. Tax returns filing, payroll and some administrative tasks were my responsibility too. This role was completely different from the first one. Another thing was, my current role was a one-man-department. I honestly enjoyed working alone. I am not saying I am not a team player – but if I were to choose, I prefer to work on my own.

A year and a half passed, and I decided to try working abroad. Admittedly, this was not part of my original life plan. But I realised that if I continued to work in the Philippines, I would not progress fast, by that – I mean financially. I knew I could earn more if I worked abroad.

October 2016 I arrived in Dubai, UAE. My first job was as Finance Executive cum Document Controller in a Recruitment company. I was given a lot of tasks – Document Controlling tasks. I was very unhappy. This is not what I had studied for! My heart yearned to work as an accountant. But one thing that was great, I got to use an ERP system. That is an added skill for me. But I still wanted to work in my profession. So I kept on looking for a pure accounting job. Luckily, after 9 months, the opportunity to move to another company appeared.

There are a lot of good things about my current job. Another thing is I’ve got a lot of spare time. That is why I decided to work on something new – being a Virtual Assistant. I don’t have plans on working overseas for an extended period of time. As my parents are getting old, and I don’t feel comfortable in raising a child out of my home country, I want to settle down in the Philippines in the near future. I want to work as a full-time and home-based VA.

Having 5 years + meaningful experience as a Professional CPA makes me confident to do any related task. I have a demonstrated history of delivering high-quality work in the industries of mechanical (current) and recruitment, hospitality and banking (past). I know advanced commands in Microsoft Office applications, especially Excel. I am well-versed in accounting software such as Xero and ERP (modified). My English communication skills are excellent, both written and verbal. Also, I was trained enough in support areas and customer service of the organisation. I am easy to work with, very approachable and willing to help, learn and understand my client’s needs. I am very reliable when it comes to meeting deadlines, accuracy and producing error-free reports.

Thank you for taking your valuable time to read my story.

For a copy of Christina’s resume please click here.