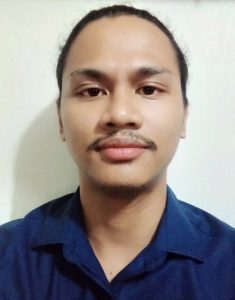 I grew up having a comfortable childhood where everything that I needed and wanted was provided for me by my loving parents. I was sheltered and pampered but I could say I wasn’t spoiled. I’m grateful for what my parents did for me growing up. It was indeed the best days of my life so far. Then adulthood happened.

I always wanted to be a professional basketball player. That was my dream, that was my goal, it is my passion. But I guess I’m not destined to become a professional basketball player. I’m not short but I’m not tall enough to be recruited. Growing up, Reggie Miller was my idol. When he retired, I looked up to Ray Allen and now I like watching Stephen Curry and Luka Doncic.

I don’t have a respective team to support since I don’t live in the States. So I go by my favourite player. Call me bandwagon or whatever. I’m just a basketball junkie in general. I could talk about basketball all day. I get emotional and passionate every time I watch it. That’s how much I love the sport. I could confidently say that I had potential in basketball, but I know you don’t always get what you want.

So there goes my dream. Of course, I couldn’t stop adulthood from happening so I got a job to support myself and start earning for my future. I worked in a bank for almost 4 years. It was a nice experience. You get to meet a lot of people, especially businessmen. You get to talk to them and learn from them and hear their success and failure stories.

Earning for myself for the first time helped me realise how hard it is to look for money. How hard really life is in general. It took a lot of effort to grow my network while I was working there. I got a lot of connections from businessmen who I got to be friends with. Having those perks and the wisdom I got from them was a nice take away when I finally left my bank job.

I left because I felt I wasn’t growing anymore. I got stagnant and the job became monotonous. Basically, I got tired of it. So I assessed myself if I really wanted to do this job for the rest of my life. Of course, the answer was no. That’s why I left and tried to go a different path. I tried sales. Became a salesman for Pepsi – but it wasn’t for me. I didn’t like the feeling where you have to be “plastic” with someone just to get them to buy your product.

Also, I didn’t like my superior. I don’t think he was fit to be a leader; he was more like a boss. Big difference between the two if you ask me. So I left after a month. And there I was unemployed once more. I had some savings good enough for me to start a small business. Right on time my friend who was a chef was planning to start up his own cafe restaurant.

I reached out to him and asked if we could be partners. I would handle the management side and he would be handling the kitchen. We will split the marketing side. He accepted my offer and so we planned for it for the next 4 months. We gathered suppliers, costing, location, menu, renovation etc. I really thought that was it. I was excited for it to happen. I thought I finally found my path in this life.

Unfortunately, when I thought things were finally turning in my favour, the business didn’t push through. My partner had a financial emergency. We still tried to make it work. I offered to cover everything for the time being just so we could start it. But he was not 100% fully committed after what happened so we had to pull out.

So there I was again, lost. With my bills just pilling up each and every month I started to worry how I was going to keep up with everything. It sure didn’t look nice that the only movement I saw in my passbook was the word “debit”. I tried to sell cars and real estate as a broker. But I realised it wasn’t enough to keep up with my monthly bills.

I got depressed after that for the next 6 months. I have a friend who was a Psychiatrist. He was the one who confirmed that I was indeed clinically depressed. I wasn’t eating properly nor sleeping. I would only sleep for like 2 hours a day and would spend the whole day inside my bedroom thinking how much of a failure I was. I wasn’t taking care of myself anymore. At that time, I actually really wanted to die. Those thoughts were actually running through my mind.

It was the darkest time of my life so far. Just thinking about it now scares me. Knowing how outgoing I am, I didn’t think or even imagine that I would go down this path. Actually nobody expected it, even myself. But I’m glad I got out of it. Little by little I crawled my way out of depression. My friend knew how I loved basketball and he suggested that I would do it as form of exercise. So that it would help improve my mood and my body overall.

At first I was hesitant to go through therapy. I just didn’t want to. But he forced me to it and I started playing and it helped me a lot. I went through the process and eventually became okay. Basketball saved my life. But one problem still lingered. I was still asking myself the question “what now?”.

Now I have a little brother who’s a crazy programmer. And me, I’m a gamer by heart and was always fascinated with technology and computers. So my little brother introduced me to programming. I must say it is very hard. It’s not easy to take on programming since you should never stop learning in this field. Technology evolves each and every day.

Since I didn’t know where I was going anyway, I agreed to try and learn programming. He became my mentor, my senior. It was hard and I came to a point multiple times where I wanted to quit because I found it too hard to wrap my mind around. But he was there through it all and pushed me despite the obstacles in programming.

Of course, I appreciate the help he was giving and I didn’t want to waste it. So I decided to persevere and to push through no matter how hard it was. I got frustrated because I couldn’t fix things, I got countless errors. But he made me realise that is the reality in programming. You will face countless errors,

sometimes dead ends. But when you finally get it working, that’s the best feeling in the world! That eureka moment makes you feel like you’re Einstein.

I started as a freelancer since it’s really hard for me to get in a good company right away, considering I’m not confident with my skill set yet. Unless you’re really lucky. Well knowing my luck, I guess I had to grind through the process. I started making projects through my brother. He gave me projects to work on and in order for me to hone my skills in programming up to where I’m confident enough to finally work long term in a company.

Up until now, I’m still learning each and every day through different problems. Me and my brother, that’s our bonding time. Because of him, I finally have a path to follow and I finally got to love programming. I think it’s a really cool job. I find it cool when people ask me what’s my job? I would proudly say “Programmer”. It makes me feel so smart even though I’m not that smart. Hahaha 🙂

One day, I would like to pass on to someone or to a group of people this skill that I have obtained as a form of gratitude. So that maybe one day I could also help somebody who doesn’t know where to go in life. Hoping I could bring light into their lives through programming. But for now, I have to further improve my skill set before I can that. Because you can’t give what you don’t have.

For a copy of Gerson’s resume please click here.